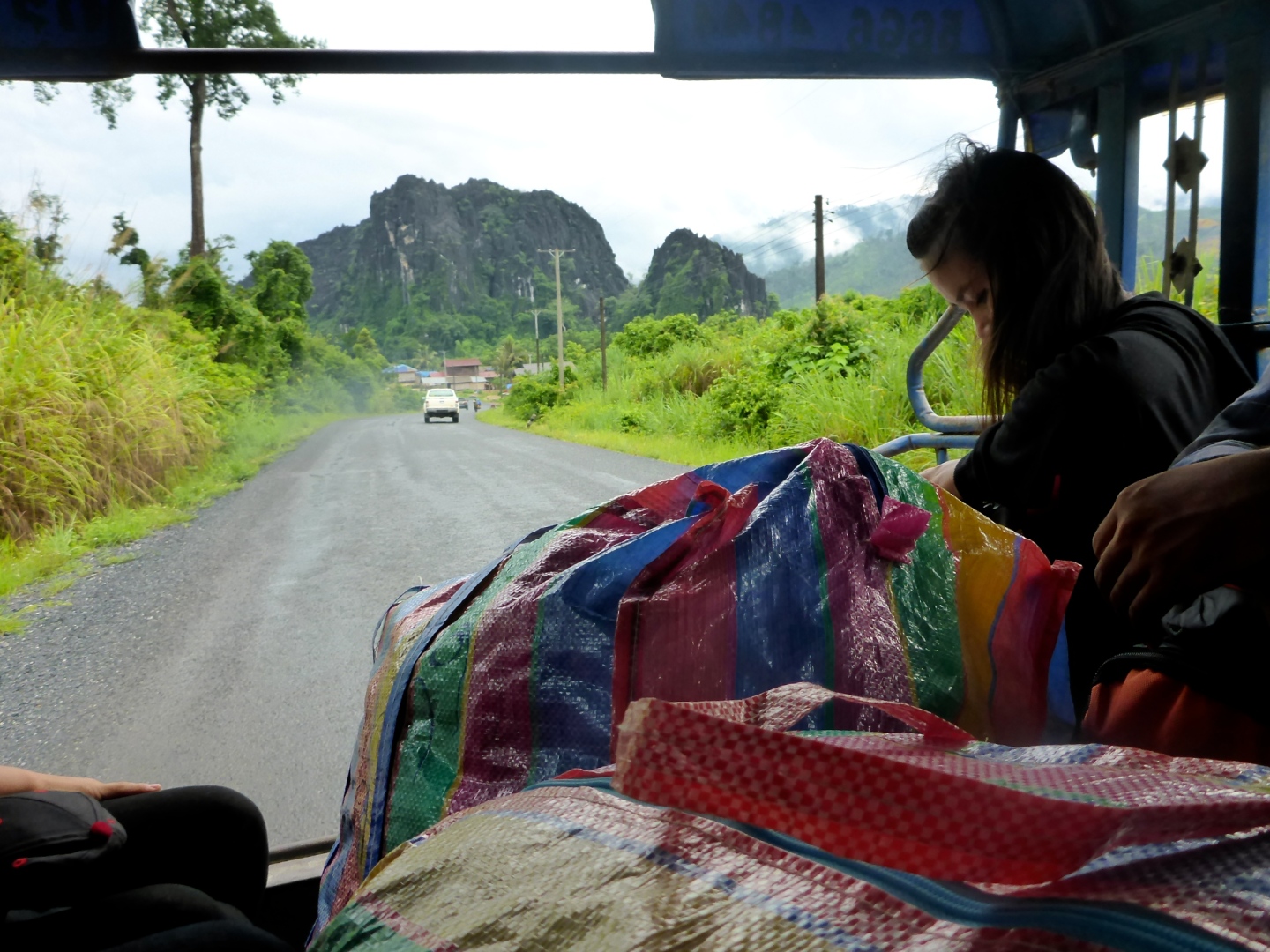 The trip would’ve been easier if I’d rented a motorbike from Thaekek and headed there on my own (like most tourists do), but coming off of 5 days atop Lafawnda The Honda, my ass was not a fan of the idea. I was told I could take the bus and make it there and back in a day (HA. That’s all I have to say about the matter).

I dropped off Lafawnda in Pakse around 5:30 pm and had booked a night bus out of there within the hour. I shared a leaky bunk (yay monsoon season) with a Lao woman and her toddler. It was…cozy.

I arrived in Thaekek around 2:30 am, spent an hour looking for an open guesthouse, and set my alarm for 5 as I had been told there was a bus to Konglor at 6 (who needs sleep, anyway). I’m sure there was a bus, but making it back to the bus station was an impossibility. The station was too far to walk, there were no tuk tuks in sight, and my guesthouse was empty (legitimately…I ended up leaving without paying because I couldn’t find anyone. Oops).

I wandered the streets (in the pouring rain, of course) looking for someone who spoke English. 6 am came and passed. I pouted. I pulled out my copy of The Holy Bible (aka SE Asia’s Lonely Planet). It told me there was a tourist information centre in town “near the fountain.”

Fuck. That. I had not yet found an English speaker, I had never seen this elusive fountain, and you try miming “tourist information centre.”

Then something weird happened, which would continue to happen throughout The Journey to Konglor. Literally, the exact moment I had decided to give up and skip this stupid cave altogether I found the tourist information centre. Right in front of me. Weird.

I headed inside and met the first (and only) English speaking Laoation I would see for the next 2 days. He was a godsend. He informed me that I had, in fact, missed the one lone bus to Konglor but I could get there via local transport…though it would be complicated. He gave me a list of towns/highway crossing names to say to the locals and wished me luck.

My first bus was a double decker Greyhound-looking thing packed to the hilt (literally…they even put stools in the aisles) with locals. They stuck me at the front near a monk on his cellphone (apparently I’m VIP), forcing the seat’s previous owner to sit on the dashboard. I felt bad…but I really didn’t want to sit on said dashboard so I made myself at home.

I tried my best to pronounce the name of the first town to the driver and was apparently successful as he parted the sea of Laoations, grabbed me my backpack and left me on the side of the highway, pointing down the road and saying the name of the next town on my list.

I wandered for awhile with Laos people shouting various town names at me. Finally, a songthaew (a pickup truck with benches in the back) pulled over, shouting the name of my desired destination. Success! The day continued this way, me repeating town names and me being shuffled around by various Laoations to various songthaews until I made it to Konglor Village. Of course the cave was closed when I got there…but I made it.

I was the only tourist at my guesthouse and, again, nobody spoke English. I eventually figured out that the guesthouse owner’s 10-year-old knew basic phrases and was able to piece together that the cave would open in the morning at 8, though the only bus leaving for Vientiane (my next stop) was at 6 am. Figures…

He sensed my disappointment and said “tuk tuk…1” which I took to mean I could take a tuk tuk back the way I came at 1 pm. Worked for me.

The scenery in and around Konglor Village was amazing on its own so it was an added bonus that the cave, itself, was also pretty cool. Lonely Planet describes it as the Greek Underworld of Hades, where you take a boat through complete darkness along a river running through the 7km-long cave. I’d say this is an accurate description. 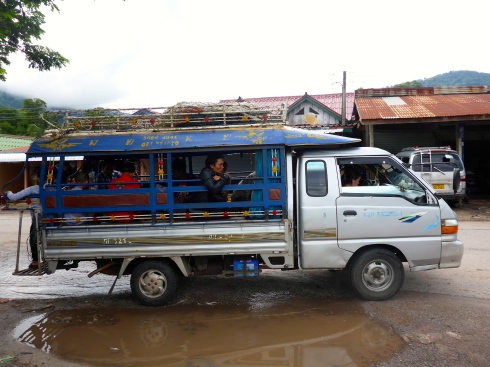 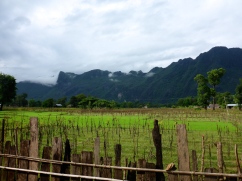 There was only one other tourist at the cave the day I visited: an old man from Toronto with his young (make that: very young) Thai girlfriend. He was quite the character and ended up paying for my boat trip so I really can’t complain about the guy…but it was hard not to judge his “youthful” taste in women. We finished spelunking, said our goodbyes, and I rushed back to my guesthouse to wait for my 1 o’clock tuk tuk.

I waited. And waited. I confirmed with Laos 10-Year-Old that the tuk tuk WAS supposed to be there at 1 and he nodded, repeating “Tuk tuk…1.” 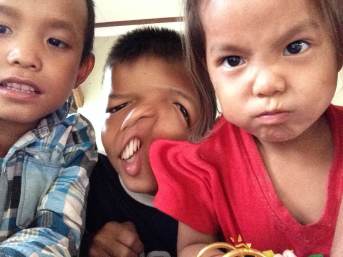 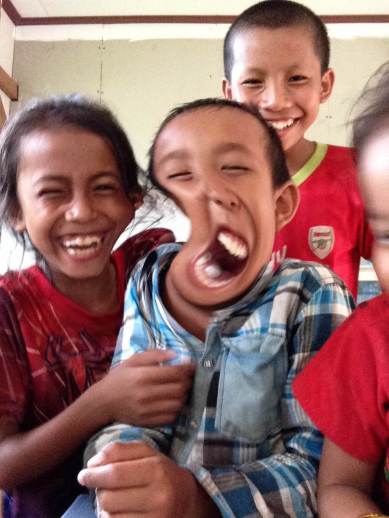 I decided to order lunch. Whilst waiting for my lunch a little Laoation girl snuck up behind me, sticking some sort of monkey thing on my shoulder. IT WAS ADORABLE.

I spent the next hour playing with the monkey-like creature, taking countless photos of it hugging my hand, hugging my legs, and doing other adorable hugging actions (I was later informed that this is a slow loris…and they are venomous…and also illegal. That’s the last time I trust a child…).

By 3 pm I had tired of the loris, was growing increasingly worried about my tuk tuk, and decided to wander the town looking for an English-speaker over the age of 18. Most people had no idea what I was talking about, but eventually a Lao man pointed to a hut saying “ingliss.”

I poked my head in said hut to find a woman sleeping on the floor. I woke her up (rude, I know, but I was growing desperate) and was delighted to find that she did, in fact, speak English. She told me “Tuk tuk cancelled. Maybe tomorrow.” I panicked. She followed with saying that I could order my own tuk tuk, though it would cost $40 just to get to the next town (as opposed to the $3 it normally costs). I told her to hook me up and followed her down the street to the phone.

Then something weird happened. Again. Literally, the exact moment I conceded to paying an arm and a leg to leave the village a songthaew pulled up. Creepy. Lao Lady smiled, said “you lucky day” and ushered me into the songthaew.

I hopped into the truck to find a Laoation woman, her son, and approximately 50 pineapples. I was confused, but when I repeated the name of the next town she nodded and smiled so away we went.

The songthaew was an adventure. I am pretty sure we took the longest route possible and we stopped roughly every 4 minutes for the woman to sell her pineapples. An hour and a half later, I was finally to the bus stop in the next town. I hopped off the Pineapple Express, took another series of songthaews, was again dropped off at the side of the highway, and eventually made it to my desired destination: Vientiane.

It was a hell of a journey, but Konglor (the cave, but more-so the village itself) was amazing and probably one of my favourite memories of Laos. The Journey to Konglor was a good one.