When I tell people I’m in Borneo they tend to have no idea what I’m on about so let me start with a brief description. Borneo is a really, really big island (the third largest in the world to be exact) and is divided among 3 countries: Malaysia, Brunei, and Indonesia. The place is known for its jungles and general ruggedness so I came here looking for an adventure. I basically wanted to hate my life for awhile and then feel all proud of myself for making it through. I wanted to rough it…or whatever.

Turns out, it’s actually a bit of an effort to find rugged in Borneo (particularly in the Malaysian bit which is where I am). My first trek into the jungle, though beautiful, was quite commercial and felt a lot like glamping. I saw a lot of cool wildlife (including the proboscis monkey which I loved because the thing looks hilarious) but I wanted authentic, rugged Borneo and this was not it. 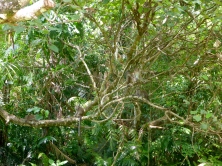 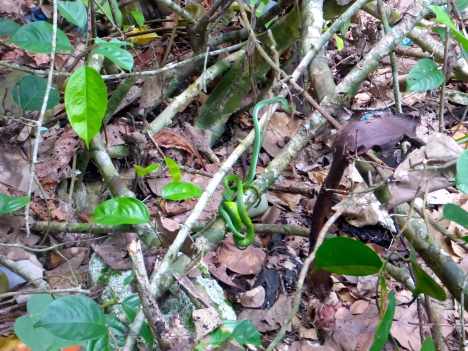 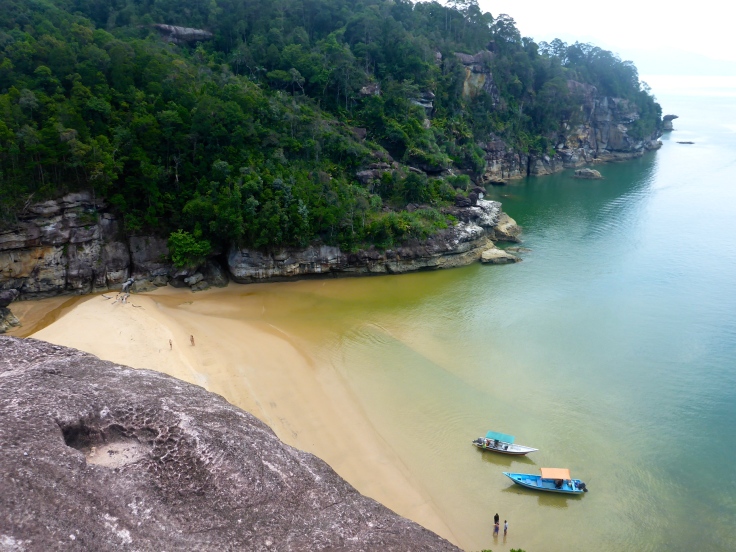 I turned to the internet and read some blog post about a guy that spent a week in a leech-filled jungle with a guide that cooked a monkey for dinner. While I have absolutely no desire to eat a monkey, this did sound rugged. I was intrigued.

So off I went to the Kelabit Highlands, a remote region near the Indonesian border where the phone signals are iffy, guesthouses are non-existent, and aside from a brief mention in Lonely Planet, a place nobody’s ever heard of.

I arrived on an teeny tiny plane to a teeny tiny airport. I made friends with the air traffic controller (essentially the only person around) who called some guy in a muddy pickup truck to take me to a homestay in Bario, the region’s major (if you can call it that) town. The first place we tried was empty (apparently the home owner had died) and the second was over my budget but I spent a few hours there anyway.

The homestay owner invited me in (by “in” I mean we sat outside next to a fire pit roasting an animal hide) for lunch. He had guests over (all hunters) so I spent the afternoon drinking warm beer and eating wild boar with the town’s local animal killers. One of the hunters mentioned he would be going hunting that evening and asked if I wanted to join. Of course I wanted to join. It was a date…but I still needed a place to sleep.

The homestay owner suggested I try one of the local longhouses. I’d read about Bornean longhouses and they have an interesting history so I was alllll over that. A longhouse is basically a really long building (no…really?) housing a number of different families. It’s a communal living kind of thing. These days, the longhouse tribes have embraced the modern world with a lot of the youngins having left for the city, but you can still find the older folk hanging around the premises with their heavily tattooed bodies and stretched out earlobes.

Back in the day, these people were head hunters. In times of trouble (or just your average Tuesday), they would chop off the heads of their enemies and display them at the front of the longhouse for all to see. They were like, “Look at all these heads I have. Look at how tough I am. Bow down bitches.“ 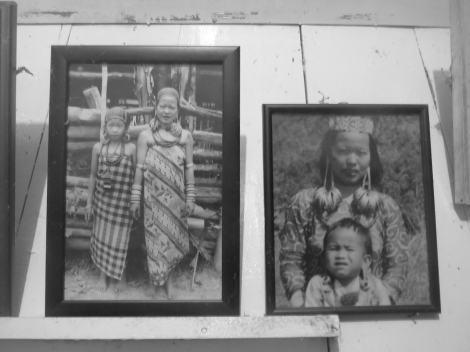 Of course they don’t do this anymore with it being like…murderous…or whatever…but it was cool to meet people with such an interesting history. How very bad-ass of them.

These days, the Kelabit people are devout Christians. Everybody’s related (“Please meet my sister’s husband’s aunt’s brother’s daughter.” “This is my brother’s second cousin’s mom’s sister.”), they’re all super friendly, and they pretty much live off the land, growing a lot of rice and pineapple.

The longhouse I stayed at was quite modern, though they did have a shortage of water for the entirety of my stay (there goes my plans of bathing) and the woman who hosted me still had the traditional stretched out ears I mentioned. She was a short, stubby 60-something year old and her chin-length ears and beanie cap reminded me of a children’s storybook character. She was adorable.

She was constantly chattering to me in broken English (I heard the word pineapple a lot) but it was essentially a one-way conversation as her hearing aid batteries were dead and she couldn’t hear a word I was saying. I did manage to piece together tid bits of our “conversation” (apparently her husband passed away in a plane crash and her kids have all moved to the city) but I spent the majority of the afternoon politely smiling, nodding, and daydreaming.

Then I went hunting. The Hunter picked me up in yet another muddy 4×4 and we drove around town picking up dogs to take with us. I learned that The Hunter owns 6 motorbikes, 5 pickup trucks, and 15 dogs (he used to have 50 but one got sick and got all the other ones sick so he now has a measly 15. Oh, and he trades the dogs for motorbikes in Indonesia). I’d say the man is a bit of a hoarder.

Now, I’ve never been hunting before, but I must say The Hunter’s version of the craft seemed a bit…lazy. We basically drove around the wilderness drinking beer, only stopping when the dogs caught the scent of an animal and started barking. The Hunter has caught some cool stuff in the past (my favourite being a cobra the length of his truck…I saw pictures) but, alas, not today. We failed to come back with any game. We did, however, pick up a couple Indonesian rice farmers along the way who played the ukulele in the backseat all the way home.

Except The Hunter didn’t actually take me home. He took me to a bar. I had absolutely no desire to go to said bar but I really didn’t have a choice in the matter. He ignored my objections, hopped out of the truck and told me to follow. The man owns a gun…I did as I was told.

The local bar was just as you’d expect: tiny, grunge, tourist-free, and full of testosterone. They served only two beverages: whiskey and beer. I didn’t exactly blend in.

I spent most of my time pestering The Hunter to take me home (my little longhouse lady was expecting me for dinner and I felt hella guilty not being present for it) and he spent most of his time trying to get me drunk. I very much wanted to keep my wits about me (being the only female in a bar in the middle of nowhere ‘n all) but eventually gave up on my pestering and tried to have a good time.

Aside from one local who spent the entirety of the evening resting his chin in his hands, gazing at me lovingly with a huge smile on his face, the patrons kept the creepiness to a minimum. It was an alright time. I even ran into the truck driver from the airport and sang a duet with him at karaoke.

Sadly, our duet was cut short when Creepy Local found an empty seat next to me. He continued to stare, chin in hand, huge smile, except he was now staring inches from my face. I stared straight ahead, he stared straight at me. He also tried to serenade me (not well, I should add…or in English) and then he blew on me.

It was time to go.

After being stuck at this bar for a whopping 5 hours, The Hunter finally took me back to the beanie-capped longhouse lady. It was an interesting first day in the Highlands. 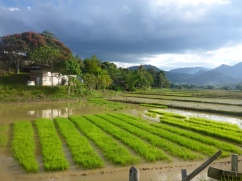 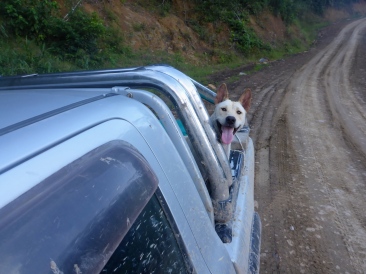 My goal for Day 2 was to find a man and a jungle. I wanted someone to show me this “rugged” side of Borneo some American had blogged about. This was harder than anticipated (it’s not like the place has a tourism office) but I did eventually succeed, securing a certified jungle guide for a trek the next day. Then I went to church.

Welcome to the Kelabit Highlands.