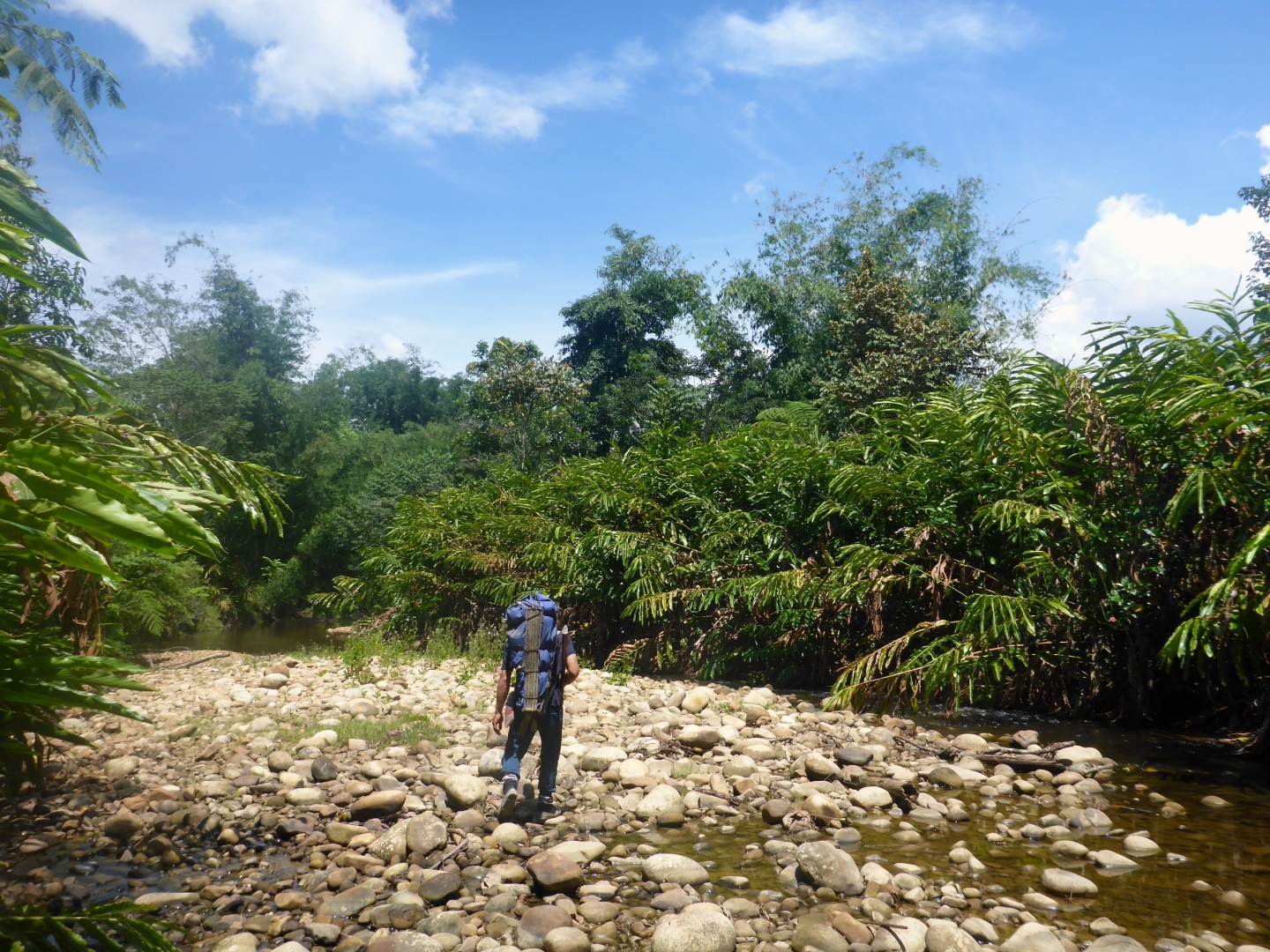 Yes, it’s taken me 5 months to post Part 2. There was this whole emergency evacuation thing (I’ll get to that in future posts) that put a wrench in my travel plans thereby diminishing my levels of free time dedicated to blogging…but I’m back. And here’s Part 2:

As I mentioned in my last post, I had a tough time finding my rugged jungle adventure. My beanie-capped long-eared lady did her best to try and help me, but her hearing difficulties resulted in her mistakenly organizing me a trip up “Prayer Mountain” for scenic views of a giant cross. Giant crosses aren’t really my thang and yesterday’s hours spent listening to Kelabit hymns was enough spirituality for one weekend…so I graciously declined and continued my hunt for a trekking guide.

Then I met The Chatty One. I am calling him The Chatty One because he was, well, chatty…but I really need to stress just how chatty this man was. He literally never stopped talking. Ever.  I know every detail of the man’s life. His daughter, his ex (though they’re still technically married) wife, his 40-years-his-junior Filipino mistress, his alcoholism, his desire for polygamy…I know about it all. Needless to say, the man was exhausting to be around.

BUT he was also my saviour. The Chatty One had recently decided he was going to be The One to bring a tourism boom to the Highlands so he was adamant on ensuring I (the token tourist) had, like, the best time ever.

Within twenty minutes of meeting him he had arranged a sit down meeting with me and a certified trekking guide. He bartered down the prices and when there was something I couldn’t afford he offered to do it himself for free. The man saved me a lot of money. The catch? He wanted to come with. Three. Full. Days. with a man that doesn’t let you get a word in edgewise. I knew from the start it was going to be tiresome.

Day 1 of our excursion The Chatty One picked me up on his motorbike and we headed to the local store (basically just 3 shelves of food in a cabin) to pick up our meals for the next three days: bone-in canned curried chicken (gag. the thought actually makes me nauseous). My little longhouse lady tried to gift me with a parting pineapple (she would) but the thing was the size of my head and there was no way I was carrying that beast through the jungle so bone-in canned curried chicken all day er’ day, it would be.

Because the jungle was a day and a half’s walk away, the plan was to motorbike to a river, hitch a ride (for free. Thank you oh-Chatty One) on a boat to the next village, spend the night at a homestay and sleep in the jungle the following two nights. It all sounded pretty straight-forward to me. But of course…it’s never so easy.

First off, the man was the most terrifying motorbike driver I’ve ever experienced. He liked to gesture to areas of “interest” (“this here is my uncle’s house,” “that there is my second cousin’s motorbike,” “sometimes, when the air blows just right, this building has internet”) but the man didn’t gesture with his hands…he gestured with the entire motorbike. I was terrified, clinging to the seat with one hand and trying to contain our cans of curried chicken with the other, as we swerved precariously down dirt roads filled with potholes. There is a reason everyone drives 4×4’s here and this would be the one time I wasn’t wearing a helmet (apparently cranial safety has yet to make it to these parts).

Fortunately, we made it to the river in one piece. The boat was not so lucky. I spent the next 2 hours on the side of a random Bornean river while The Chatty One and (enter Certified Jungle Guide stage left) The Jungle Whisperer attempted to patch the numerous leaks in the boat.

On the upside, I was kept company by a couple of 30-something Australian ladies who were a great laugh to be around. Aside from the back of a head of dreadlocks I’d seen on Day 1 that I can only assume belonged to a dirty backpacker, these were the first tourists I’d seen in days. This was a great turn of events (and a much needed break from The Chatty One).

Our boat was eventually rendered usable and we began our journey up the river to the village of Pa’Lungan. The whole thing just killed me. The boat kept getting stuck and The Jungle Whisperer had to physically push us up the rapids. Too. Good.

45 minutes later we “docked” at the river’s edge, ate rice (classic) with some random locals, picked up a water buffalo for the road, and walked the remaining two hours to the village.

We spent the rest of the afternoon chit chatting with various Kelabits and the rest of the evening drinking rice wine and whiskey at the homestay. All in all it was a good first day. 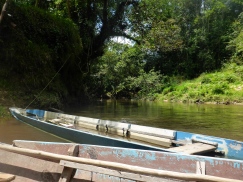 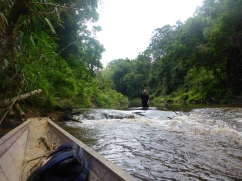 Day 2 I would head to the jungle.

Me, The Jungle Whisperer, and The Chatty One said our goodbyes to the Aussies and headed out bright and early towards our camp for the night: a hunting shelter in the nearby wilderness. We stopped at some rice fields along the way, waved hello to the roaming water buffalo and arrived within a short 2 hours.

Then we went hunting. Up until this point the trekking had been easy but apparently wild boar like the hills. The steep, muddy, leech-infested hills. We spent a good hour crawling over fallen trees, making deer mouse noises with leaves (don’t ask), and climbing up the slopes of the hill. Then it started to rain. Like, really rain.

We failed to catch any game, the number of leeches increased at an alarming rate, and our trek turned into an all out slip ‘n slide resulting in mud in more places than I am comfortable talking about. It was not a great time.

It took us at least an hour and a half to return to camp and an additional half hour to rid myself of every leech stuck to my body. The worst was when The Jungle Whisperer ripped an inch-wide blood-sucker from my scalp. Blood trickled through my hair. It was repulsive.

The plan had been to spend the first night at the hunting shelter (a small wooden platform half a foot above the jungle floor with a roof but no walls) and the second sleeping in hammocks between the trees. However, at The Jungle Whisperer’s mention of leeches falling from trees as we slept, I requested to return after just one night. One night in the jungle was more than enough for me.

Even in the “shelter” (I did not, in any way, feel sheltered) my one night in the jungle was a restless one. With only a mangy sleeping bag between me and the elements, visions of leeches (and snakes…and tigers) danced in my head. All. Night. Long.

We woke up early, packed up our curried chicken and, as per my request, set out for the trek back to Bario (an approximately 6 hour walk). We made a couple detours along the way, stopping at The Jungle Whisperer’s family hut for lunch and a break from the rain, with The Chatty One and myself trekking solo once we hit Pa’Lungan.

Trekking with only The Chatty One was a pain. The rain would not let up, the blisters were setting in, and the constant 24/7 chatter was really starting to wear on me. 3 hours in we agreed that we were both exhausted and it was just not fun anymore. I had wanted to hate my life and I was finally there. I was done with the Kelabit Highlands.

The Chatty One hired me a 4×4 from a random man in a rice field who drove us the rest of the way to Bario. He dropped me off at the airport just in time for the day’s outgoing flight. I stuffed my muddy, leech-filled clothes into a garbage bag, ordered some ramen and said my goodbyes.

In just my last day in the Highlands I went from jungle to 4×4 to propeller plane to taxi to bus to Brunei (and no, I never did get the chance to shower). 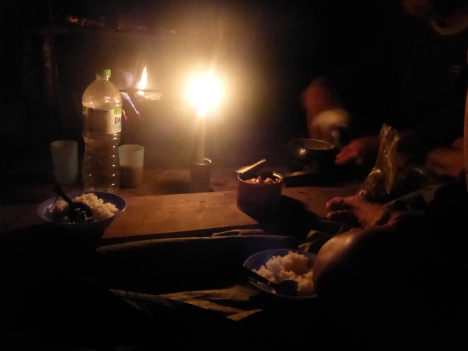 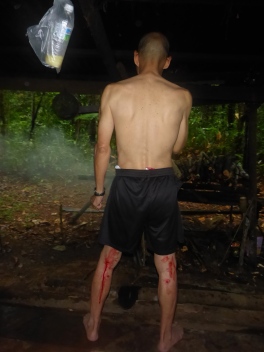 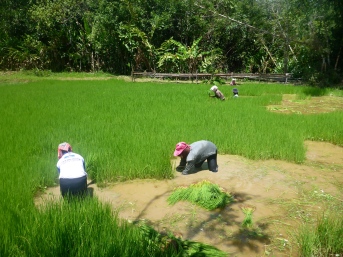 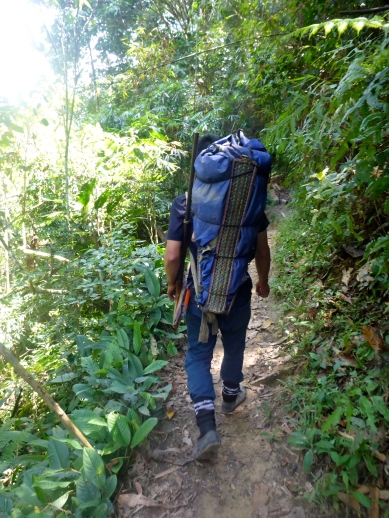 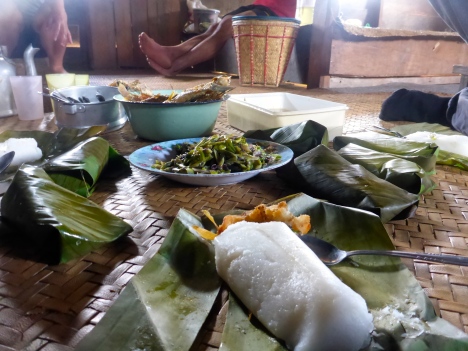 I wanted rugged. I think I found it in the Kelabit Highlands.