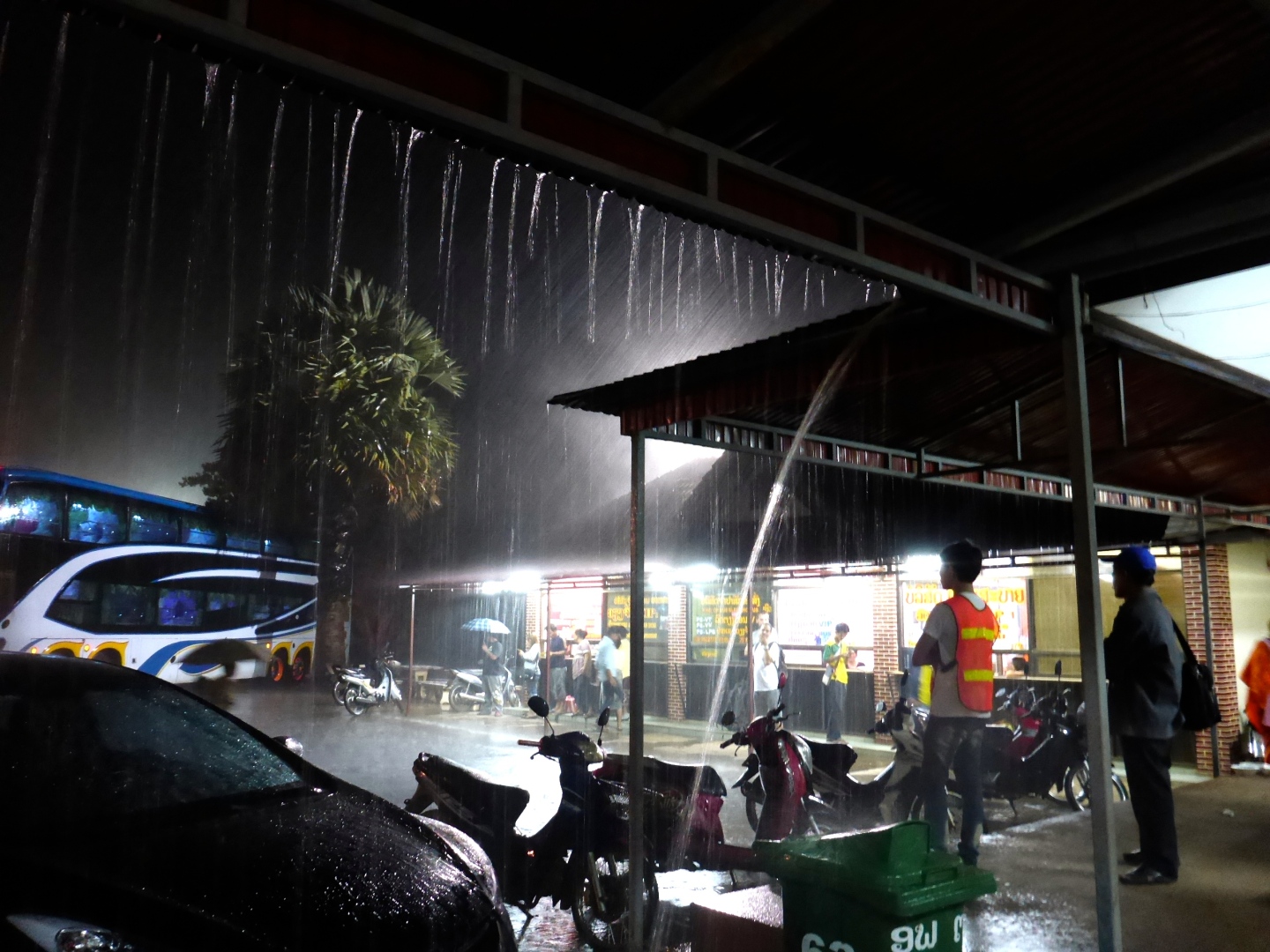 I’ve decided to devote a blog post to road side bus stops, along with some ramblings about long haul bus trips in general. Why, you ask? Because I am currently on one. And hating it. And I’m out of Candy Crush lives with 14 hours of “VIP” bus hell still ahead of me. I will entertain myself (and potentially you…whoever you are) with this blog post. Let’s get started.

No matter what country you’re in (in South East Asia, that is), the long haul bus trips are the same. You show up at the bus station (or go through a travel agent but I try not to do that anymore as they cost more) and choose between 1372892 different companies selling tickets to your destination of choice. Every company calls themselves “VIP” and the majority promise bathrooms and wifi. This is always (with maybe two exceptions) a lie. I will straight up ask them, “Do you have a toilet on the bus?” and they will say yes. and it will be a lie.

While a toilet may not be a necessity to some people, it is for me. I pee a million times a day (TMI, sorry, but it applies to the story), so if you stick me on a 12 hour bus ride with no toilet we’re going to have a problem. After nearly peeing my pants on a few too many bus journeys, I learned to dehydrate myself. Literally, anytime I’m planning a bus trip, I avoid water for hours before and during the bus ride. It makes for an uncomfortably thirsty time…but it gets me through.

Let’s move on to the temperature issues. While mini buses are usually sweaty, long haul bus rides are of Arctic conditions. There are 15 of us on this bus right now (me being the only tourist) and all but 6 of the passengers are wearing winter coats. The guy in front of me is wearing a toque (a toque! It’s 30 degrees outside!). Why, on earth, they keep these buses so cold is beyond me. Nobody’s enjoying it. It’s giving me the sniffles. #unimpressed. What are this?

Now for the road side bus stops. With there not being a toilet on the bus, the driver will generally stop once (maybe twice…if you’re lucky) for a bathroom/food break throughout the journey. This is always (there are no exceptions here) at a weird, somewhat sketchy, location. Sometimes it’s just a shack, but usually it will be a large open area with a carport-type roof and it will almost always be filled with gawking locals.

These stops are usually in the middle of the night (since I tend to take night buses) so I come off the bus completely groggy, trying to adjust to my surroundings as quickly as possible (this is made more difficult by the fact that my glasses are usually fogged. Arctic to tropical climate change ‘n all…). Why must I adjust so quickly? Because the driver very rarely speaks English and I have no idea how long we’re stopping for. I’ve actually had a bus leave without me once. Thankfully, it was when I was with that Karlee character so she stopped him before he’d made it out of the parking lot (thank Yeezus).

But anyway. I make a beeline for the bathroom (which they sometimes have the nerve to charge you for) and it is always disgusting. I have never had a decent road side bathroom toilet. Ever. I once peed (in unison with a Vietnamese lady) on a long tile pathway with my feet on two bricks. That was the bathroom. A tile floor…with two bricks. And everyone pees together. (But how do you flush?!) You don’t. You pee, you leave, you avoid everyone’s puddles.

Now for the food situation. Ordinarily, I’m all for eating what the locals eat and I’ve enjoyed many a meal of street food. However, the hot food they serve at these road stops is more than unappealing. It is usually a whole fish (though sometimes a mangy chicken) that looks like it’s been laying out in the sun for hours and ran over…twice. It’s a case of food poisoning waiting to happen. Avoid at all costs.

So I head for the packaged goods, which are also perpetually lackluster. You can choose between chips, cookies, chocolate, candy, and a variety of Asian items that I think are mostly prawn crackers. I’ve tried my hand at all of these items (I’ve been on a lot of bus rides), never with much success. The chips will be stale (the fact that I have to dust off the packaging is never a good sign), the cookies broken (more like crushed), the chocolate melted, and the candy is either hard or just generally inedible. On my last bus ride I bought no-name Smarties. They were melted together and tasted tangy. Why did they taste tangy?!

I could go on for hours about the questionable events that occur on and during long haul bus rides but I think I’ve covered the basics. I’ve also got more lives on Candy Crush now. I think I’m done here.

Thanks for reading, friends.

Omigod omigod omigod. This bus stop takes the cake for strangest one yet (I’m in Sarawak, Borneo…if you’re needing a frame of reference). It’s 7am. I’ve slept *maybe* 2 hours and I woke up to an empty bus. I panicked because I’ve been waiting anxiously (I broke and took a sip of water a couple hours ago…should’ve known better) for a pit stop and I nearly slept through this one. I ran to the toilets (not knowing how long the bus has and will be stopped for) to find a rather bizarre and just all around sad situation.

In the middle of a full-fledged food court (this was a fancier stop than usual) they had a series of tanks and cages housing various exotic reptiles…next to a bunch of kiddie rides. I took only a quick glance the first time around (Iike I said, I was unsure about the allotted stop time and I really had to pee) but I saw the driver on my way out and he was still enjoying his morning coffee so I headed back for further inspection.

It was mostly turtles. Lots of turtles. But like, really big exotic turtles…in tiny tanks and poor conditions. There was also a few lizard-type things and a gigantic iguana. The iguana was just sad. He (at least) had a cage big enough for his size but there was no water and he looked…wilted? Yes. Wilted. Oh and there was a big ass python surrounded by money. Actually, all of the reptiles were surrounded by money. I’m going to assume that they do this for luck or good fortune or something. 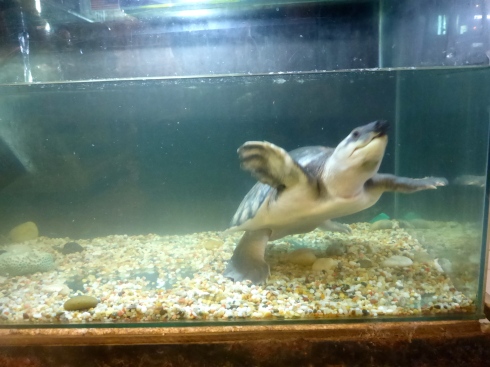 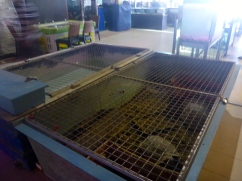 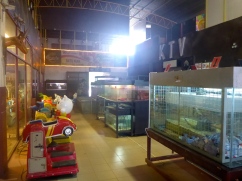 Ah, yes, Asians, animal cruelty will bring you good fortune. That will do the trick…